Tutorial Level 1
This zombie is called Brian. He often thinks that all other zombies in the world is mumbling his name the whole time. At least Brian feels special

Zombies are the most basic "zombie" units. Having no special defensive equipment or travel abilities, these zombies are susceptible to any type of attack. They are found in most levels and are the first zombies the player encounters in every Bloom and Doom world. At the official start of a level, a siren noise will appear and the Announcer "*A random opening line* THE ZOMBIES ARE COMMING!" signaling that the zombies are about to come. The Conehead Zombie, Buckethead Zombie, Screen Door Zombie and Trash Can Zombie become this zombie when their armor is destroyed.

This zombie is called Brian. He often thinks that all other zombies in the world is mumbling his name the whole time. At least Brian feels special

It takes a certain kind of zombie to be a Ducky Tuber. Not every zombie can handle it. Some crack. They can't take it. They walk away and give up on brains forever.

He put on a coat, and then he became whole.

When it is cold, he always puts on that nice coat that his mom made him for christmas. Hey, somebody should apreciate everything that your mom makes.

In a standard Adventure or Survival Mode level, Zombies will be the first to appear and will start the assault in approximately 20 seconds or the time it would take the player to plant three Sunflowers (or Sun-shrooms), as measured during a Frontyard (or nightime) level. They can be killed by planting a Potato Mine three spaces away from the zombie or planting relatively cheap offensive plants like Peashooters or Cabbage-pults. For Night levels, you can use mushrooms, like Puff-shrooms and Scaredy-shrooms. One Puff-shroom, despite its short range, will be able to take a single zombie out on its own. However, repeated attacks may be able to kill the Puff-shroom. The Tangle Kelp provides an aquatic Potato Mine-style plant in Backyard levels, except only one zombie can be killed per Tangle Kelp. For dealing with large volumes of zombies, more expensive additions such as the Torchwood and Melon-pult are available, in addition to instant kills such as the Jalapeño, Cherry Bomb and Doom-shroom. Zombies can eat your plants and brains, where it is then the player loses the level and try or start that same level again if it does eat your brains (the same also applies to other types of zombies). Any offensive plant can kill one of them, except when planted right in front of them. Two Spikeweeds or a Spikerock will be enough to kill a regular zombie 90% of the time, but because of slight speed variations, the player may need three Spikeweeds or a Spikerock and Spikeweed to kill them.

Zombie and his variants' sprites

Zombie's Almanac Entry (Will be re-made) 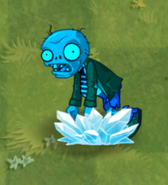 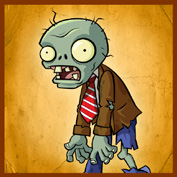 Dead Zombie
Add a photo to this gallery

HD Winterjacket Zombie
Add a photo to this gallery

Retrieved from "https://pvzbad.fandom.com/wiki/Zombie?oldid=386"
Community content is available under CC-BY-SA unless otherwise noted.